Home » Blog » How to » How to grow Plumeria (Frangipani) indoors in containers. Closer look. Cultivars. True or fake on eBay? (part 2/5)
How toPlant infoPlumeria

Plumeria is described as a small 6-25 ft (1,5-8 m) tree. Comparing to many other trees it is indeed can be considered small. However if we are talking about growing them indoors it is much larger than your average house plant. Luckily it has an ability, which will help us to fit it even in a smaller room. You can take any part of its thickened, moisture-conserving stem or branch, plant it and in a month or so it will root and continue to grow the green tips or give 2-4 new tips if it is a middle cutting (with no tip). This amazing surviving power has made Plumeria to a symbol of immortality in some Buddhist cultures. 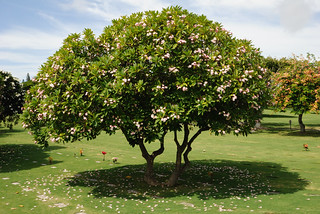 How big a tree, growing free in its natural environment, can actually get, depends on the species and cultivar. The range is huge – from over above mentioned 25ft (8m) to just 2-3ft (0,6-1m) for some dwarf varieties. Botanists still cannot agree about how many species there are and depending on the source it will name from 7-8 to almost 50 different Plumeria species.
Each of them can be relatively easy hybridized into an endless amount of more or less distinctive cultivars with its own growth habit, leave’s and flower’s shape, color and scent.

The headache for botanists is actually good news for us, growers, as everyone can find some cultivars to fall in love with on this reach tropical Plumeria smorgasbord. There are over 300 named and registered cultivars and  so many more, which are still unregistered.

Obviously, varieties with compact and short branches or even dwarf varieties are more suitable for growing indoors, but it doesn’t mean a home grower has to deny himself the joy of having a plant with one’s favorite blossom just because the tree is on a lankier side. Check this post for a video showing my tall ‘Siam red’ growing side by side with a compact (not a dwarf so) ‘Mardi Gras’.

Even if lush 8-12in (20-30cm) long leaves evolving around the branch tips are a great tropical addition to your home on its own, the main Plumeria attraction are the inflorescence of magnificent iconic flowers. 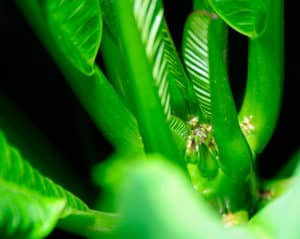 Inflorescence evolving between the leaves

When a branch is mature enough you might want to start checking on its tips, because one day you will see instead of claws of new leaves, a tiny bud pushing out from the middle of the tip. From that point it will take about two months for that little curly head to rise on its stalk and to fire a show of the most well-being charged flowers under this sun.

Those flowers must have been playing right strings on our human souls since long time ago. We can thank missionary priests for the wide spread of Plumeria throughout the tropics as well as ancient Polynesians who packed its cuttings together with food and seeds for their raft journeys across the Pacific to settle on new islands. 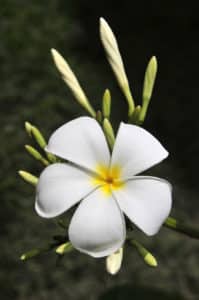 The dazzling beauty of Plumeria flowers lays probably in their elegant simplicity. Five (most often) petals slightly overlap each other and fold in a pinwheel shape; petals are joined together at the base, which is attached to an individual stalk. This attachment will get loose and drop the flower before any visible traces of decay appear. 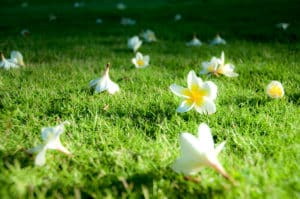 A tree in bloom will always give you plenty of perfectly fine blossom to pick up from the ground beneath it. Put it in some water and you have an ultimate decoration for your bedroom or bathroom, which is going to last a few more days. 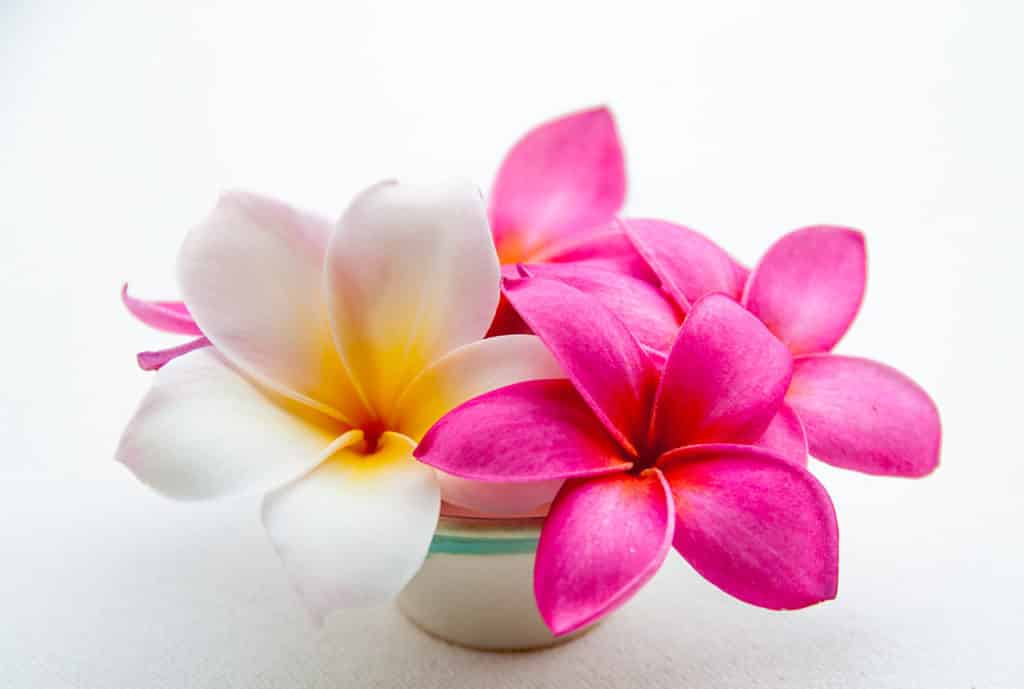 Small, but numerous variations of Plumeria flowers’ design give us plenty of cultivars for each and every taste. The petals can be broad or narrow, with rounded or pointed tips. They can overlap a lot or not at all. They can be fully opened or resemble a shape of an old-time gramophone horn. They can even remain almost unopened – so called shell-type. 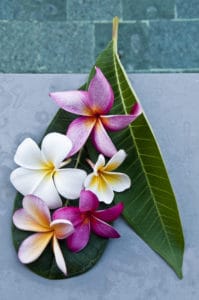 However the most prominent attribute of this symbol of beauty is its color palette. The inner base of petals is normally sunny yellow turning toward the edges to white, pink or red. While it is a gentle gradient transition between colors in some cultivars, there can be stripes radiating from the center in others. The overall flower color can range from delicate, pastel tones to bold, almost black red. Usually Plumeria flowers are classified into five color groups: white, yellow, pink, red and rainbow, where the rainbow means the presence of all above mentioned colors.

While these flowers’ colors and shapes are so appealing to our eyes, what will certainly complete your conversion into a Plumeria lover is its scent.  knowing the abundance of cultivars, you don’t expect Plumeria to content itself with just one fragrance. Again you may choose from a large list of varieties with often unique aromas. To give you an idea it can remind any of the following scents or its endless mixtures: coconut, lemon, lime, peaches, apricots, apples, grapes, roses, gardenia, carnation, jasmine, honeysuckle, cinnamon, nutmeg, almond, vanilla, candy or even chewing gum. Only a bunch of cultivars have little or no scent at all. As a rule white, yellow and pink flowers have a superior fragrance, while reds are relying more on its bold appearance and the
aroma is more sparing.

“Somehow I feel spiritually connected when I see or touch a plumeria flower”. Jim Little

According to 16th century manuscript, Aztecs’ medicine-men where prescribing the highly praised cacalloxochitl (Plumeria in Aztec language, Nahuatl) described as being of “exceeding beauty”. They were making fragrant water of its flowers for the relief of fatigue and to give “gladiatorial strength to the body” of the patient who bathes in it. As one can see, Plumeria’s intimate connection to our day’s spas has ancient roots. 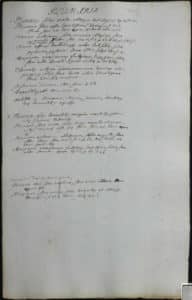 First Plumeria description. By Carl Linnaeus in his Species Plantarum, 1753

The scientific name Plumeria was given by Carl Linnaeus to commemorate Charles Plumier (1646-1704), French royal botanist who made three expeditions to West Indies and was the first to give a scientific description of many American plants. The common name Frangipani is a hint on how enchanting Plumeria’s fragrance is. Marquise Frangipani living in 16th century Italy was the creator of a largely popular perfume used to scent leather gloves. When the flower became popular among Europeans it reminded them the smell of those perfumed Frangipani gloves and the name stack.

Are you one of those people who give their plants names? I don’t do that. With Plumeria however, we need to use names, when talking to other growers. There are so many cultivars with distinct traits that it wouldn’t be enough to describe them as yellow with rounded petals, or dark red with pointed petals. They have cultivar names. Some names are registered. The responsible body for Plumeria cultivars’ registration is The Plumeria Society of America (PSA). They have about 300 names (many with AKA names) registered. There are even numerous cultivars popular among growers, which are not registered with PSA, but their names are largely accepted.

In theory, all plants with the same cultivar name should be genetically identical, i.e. they should have been propagated by cuttings only, all from the same original plant and from their own cuttings in its turn. No seedlings of a named Plumeria can have the same name. Seedlings’ genes are different from parents and so are their distinctive traits. 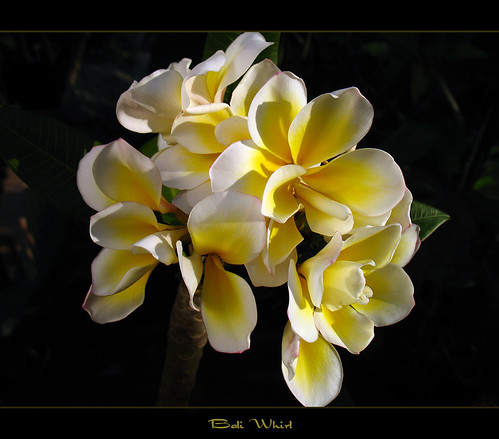 The best cultivar to demonstrate the idea behind it is ‘Bali Whirl’. A genetic mutation made it to grow more than five petals in two or more layers and they were kind of misshaped. The result was maybe not so aesthetically perfect, but absolutely unique. Seedlings of ‘Bali Whirl’ loose this mutation and revert to Plumeria’s regular shape. So all ‘Bali Whirl’ wide spread in growers collections are the parts of that originally mutated tree, grown and spread further by own cuttings.

To give you an idea about the diversity of Plumeria flowers, I assembled a small cultivar gallery. Most photos are taken by my yet-to-be-met-in-real-live friend Stuart Woodfin. He kindly let me download some of his Flickr photos. Click on each photo to see a short description of each cultivar growing habit (dwarf, compact, medium or large tree/branching), scent and keeping quality (how long flowers are keeping fresh).

If you Google for Plumeria or join Facebook groups for Plumeria lovers (three largest groups there by the way are Plumeria growers, Plumeria Addicts and Plumeria Paradise) sooner or later you will come across people referring to some of their plants as noid. What is it? It stands simply for NO ID.

All Plumeria, which you are not sure are coming as cuttings from a certain cultivar must be called NOID. Especially if you are planing to sell them or cuttings from them to someone else. Even if you think that your plant look absolutely the same as some named cultivar, if you don’t know where it’s coming from, – it’s NOID. You can call it whatever you want for yourself, but you shouldn’t sell it as anything else as NOID.

It’s natural to try to identify your NOID, to look for similarities with known plants, to ask advise from others to identify it, but it should stay a NOID. That is to avoid circulating plants with different sets of genes within one cultivar.

If it gains some new interesting traits like new color combination or shape you can give it a new name and, if you want, you can register it with PSA as a new cultivar with that name.

So it’s good to know that when you buy Plumeria seeds, you will not get the same cultivar they are coming from.

Plumeria fakes on Amazon and Ebay

What is also good to understand when buying Plumeria on Internet and especially on Amazon and Ebay is that you can’t trust all the photos out there. In fact, unfortunately, most photos on those sites are really heavy altered in Photoshop.

Scroll up and look once again on photos of real cultivars, then scroll back and look below. Those fakes are not hard to see through. They look like if a five-year-old would use the most screaming colors to fill in a drawing in a coloring book. Not a talented five-year-old. If you order them, you are going to get in best case a common white or pink NOID.

You can still order Plumeria on Internet and even on Amazon and Ebay, but make your home work, look through all seller’s photos and if they all look real and natural to you, it should be safe. Better so to order it from an established Plumeria nursery.

I do have some Plumeria cultivars available in my own web shop.

Read other posts in this series or leave your email address and I’ll let you know when new posts are out:

How to grow Plumeria (Frangipani) indoors in containers. Introduction to Plumeria. (part 1/5)

How to avoid flies in your newly potted plants 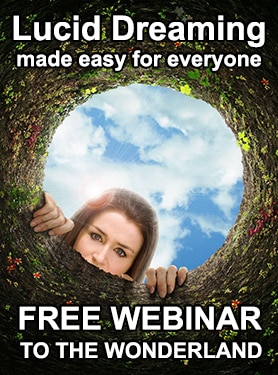